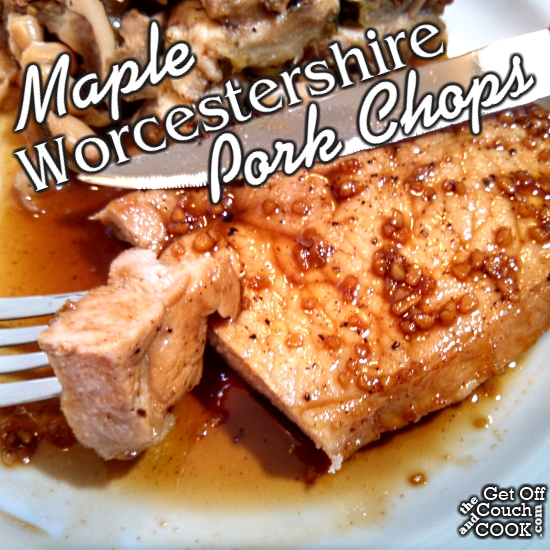 Pure maple syrup and Worcestershire sauce pair up for an amazingly quick sauce to serve over pork that would be equally delicious with chicken.

Since I had to thaw and hack into one of my pork loin roasts to make chops the other day, I had pork I needed to do something with.  Since the hunk of porcine was too small to adequately roast, I decided I may as well do chops again.  I mean, chops are quick and easy and there was a sauce I really, really wanted to try.

In my recipe travels, I encountered a burger with maple-Worcestershire onions that sounds AMAZING.  The idea of the sweet syrup with salty Worcestershire made me drool just thinking of it.  Of course, since Mr. Onion-hater is called that for a reason, I imagined the sauce for a slightly different application.

First I seasoned the chops with a little salt and pepper and cooked them for 4-5 minutes on each side.  Then I set them aside while the sauce bubbled for a few minutes and added the chops back in to finish cooking.  The whole process took about 20 minutes, including cutting the chops themselves.

I don’t know why I overlooked chops as quick weeknight meal, especially since we are not a-scared of pork in these parts.  Pork loin is still considered a lean meat and is just very slightly higher in fat than skinless chicken thighs and is actually lower in cholesterol and sodium. 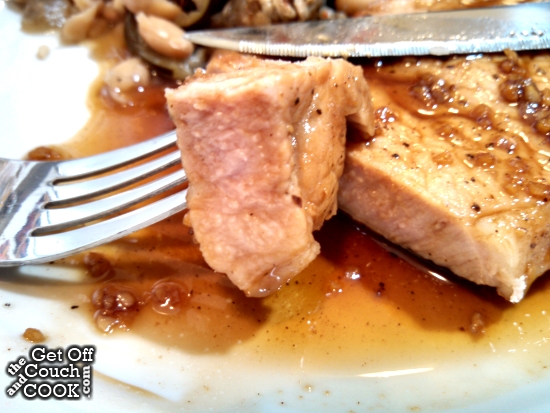 It’s also not as scary as it was in the past.  My mom and grandmother used to cook pork until it was very well done but the risk of things like trichinosis are a thing of the past so you just have to make sure it reaches 145º in the center to kill off any food borne ookiness.

Yeah, I do feature bacon quite a bit on this site but we eat bacon in moderation around here and use it as an accent flavor to keep the fat and sodium in check.  Since Mr. O’s cardiologist has given him a clean bill of health, we still eat our other white meat with no guilt whatsoever. 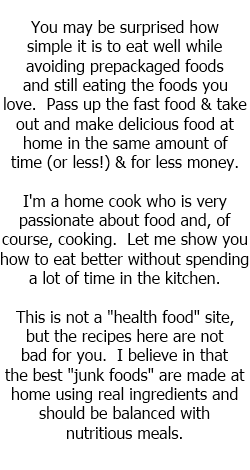 Please just be nice! Comments that are deemed inappropriate, including general or self-promotional spam, offensive or harassing statements, and rude language will be deleted.